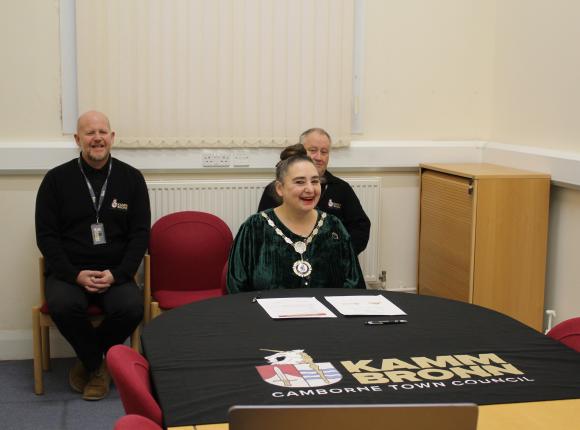 On Tuesday 13th December, after many months of discussions and planning led by Camborne's Cllr Chris Lawrence, The Mayor of Camborne, Councillor Zoe Fox, signed a 'Sister Town Agreement' over an online call with the Mayor of Copper Coast Council, Cllr Roslyn Talbot. This agreement aims to cement the friendly and cooperative relationship between Camborne Town Council and the Copper Coast Council in South Australia.

Both Councils declare the two shall be Sister Towns and that they will undertake promotion and understanding of each other's heritage, culture and values. Additionally the towns agree to promote and facilitate the knowledge and cooperation of their young people, businesses and community organisations.

'It has been a long term aim of mine to establish links between the Copper Coast and Camborne, particularly the town of Moonta (known as Little Cornwall). When I visited the Copper Coast, it was clear to see we have so much history and cultural similarities- our relationship going forward is important to preserve and celebrate the Cornish heritage we all share.' Cllr Chris Lawrence

Future tourism, commerce and even sporting opportunities are listed as objectives on the agreement. Mayor Zoe Fox said:

'Thanks to Councillor Lawrence's extensive groundwork, I am delighted we have forged this link between the towns which I hope will be fruitful and lasting.'

Pictured: Cllr's Chris Lawrence & Zoe Fox on call during the agreement signing with the Copper Coast Council, supported by staff and members of the community.