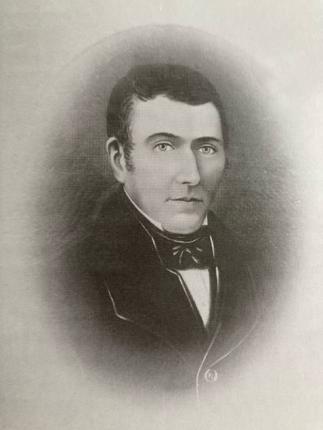 25 June 2021 – Sixty years since the factory closed in Tuckingmill, a new plaque has been installed to commemorate Thomas Davey, the co-inventor of the safety fuse that was manufactured in the town between 1831 and 1961.

In the flourishing mining industry of the 1830s, miner Thomas Davey along with the industry renowned William Bickford, recognised the dangers of dynamite for mine workers and collaborated to find a new solution. This led to a patent of the safety fuse to create a slower, more controlled explosion when blasting rocks.

For decades local children had called Thomas Davey’s grave in All Saints Churchyard in Tuckingmill the ‘Devil’s Tomb’ – running around it to summon evil spirits – without knowing that he was a local hero who played a critical role in the early days of Bickford’s history, saving lives around the world. His son, Thomas Davey Junior (1821-1863), also buried in the tomb, continued his father’s work by enhancing the safety fuse in 1861 by using “pipes and tubes of lead”. He was just 42 years old when he died, leaving behind a family of six children.

By 1863 both Thomas Davey Senior and Junior had died prematurely and sadly this branch of the Davey name was lost from Cornish history – even though Thomas Davey Junior’s brother Simon expanded the business in France. This became the international company Davey Bickford which still survives today; all down to a boy from Tuckingmill nearly 200 years ago.

On the 60th anniversary of the factory closure in Tuckingmill, Thomas Davey’s four times great granddaughter, Alexandra Lewis, wants to put his name back on the Cornish industrial map with the installation of a plaque in his memory. The plaque, crafted by Cornish monumental mason Rob Lawrence, reads:

Alexandra Lewis commented: “60 years on, this is an opportunity to celebrate Tuckingmill’s pivotal role in global mining.  Thomas Davey’s invention saved lives around the world but was written out of history books with his death. Now it’s time to put his contribution back in the spotlight and revive a piece of forgotten industrial history within Cornwall’s rich mining heritage. It is an honour to remember an ancestor who made such an impact and reflect on how he helped to promote a safer workplace for miners for generations to come.”

Bryan Earl of The Trevithick Society explained: “It is difficult to comprehend now the importance of Bickford, Smith & Davey to the Cornish people. Their operation was of foremost importance.”

Rev Rosheen Browning, Priest-in-charge of Camborne, Tuckingmill, Penponds, Crowan & Treslothan, added: “It is important to remember all that made Tuckingmill great in the 1800s and has shaped a thriving local community today. I hope this legacy inspires the next generation to be entrepreneurial and grasp the opportunities that lie ahead, showing what can be achieved by Cornish talent.”

To further support the local community of Tuckingmill, the Lewis family has donated £1,000 to White Gold Cornwall which works with children, young people and adults across the whole of Cornwall and the Isles of Scilly providing 1:1 mentoring to help them navigate life’s challenges.