The Pride of Camborne Celebrated 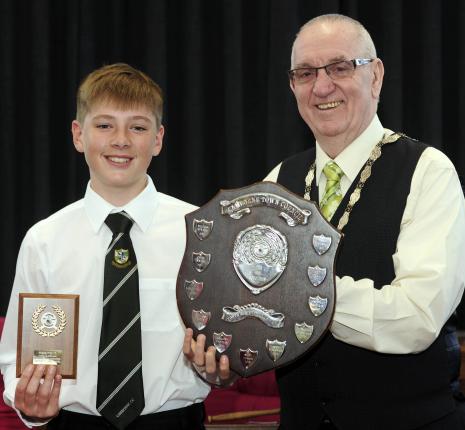 'Camborne Town Council is once again delighted to recognise the outstanding achievements of members of the community with the Town Council’s Annual Award Ceremony. Nominees and their guests joined an assembly of Councillors and Council Staff to proudly receive their awards in a ceremony held to co-inside with the Annual Town Assembly.

The Town Council Awards are presented to nominees that live, work or participate in a community group or volunteer in the Parish of Camborne. Amongst the winners were Councillors, Community Volunteers and Students from Camborne Science and International Academy. Every year a relative of the late Sid Godolphin; a former county, district and town councillor for Camborne, and for whom the pinnacle award honours, is invited to the event to present the awards. This year, the awards were kindly presented by Mr Philip Godolphin.

The Sid Godolphin Award is presented to winners who are 18 years and under and is for achievements in areas such as sport, academic, extra-curricular or voluntary work. This year the award was proudly presented to Alfie Macdonald (pictured) in recognition of outstanding achievement in cricket. Unfortunately, Alfie was not able to attend the ceremony in early May, so he was presented with the Award later in May by Mayor of Camborne, Councillor David Wilkins.

The Mayor's Award (Town Plaque) was presented to Mr John Hayes in recognition of his work for the Royal British Legion. Town Plaques were also received by Mrs Diana Johnson for outstanding community work, Mrs Wendy Curnow for work at Camborne Music Festival and Mr Colin Stevenson for his outstanding voluntary work for Camborne RFC.

Camborne Science and International Academy was very well represented, with five of its students receiving Achievement Awards. Joshua Patterson was recognised for his outstanding achievements in music, Kieran Williams for his courage and determination in response to challenge and adversity. Chloe Vaughan was recognised for her resilience, bravery and motivation in the face of adversity, Kerris Bowden for contribution to charity work, finally Harry Jukes received an award for his outstanding sporting achievement in cycling.

Community volunteer Mrs Carey Thomas of Camborne RFC also received an Achievement Award for outstanding contribution to voluntary and charity work and received the same warm thanks with applause from those representing the wider community on the night.