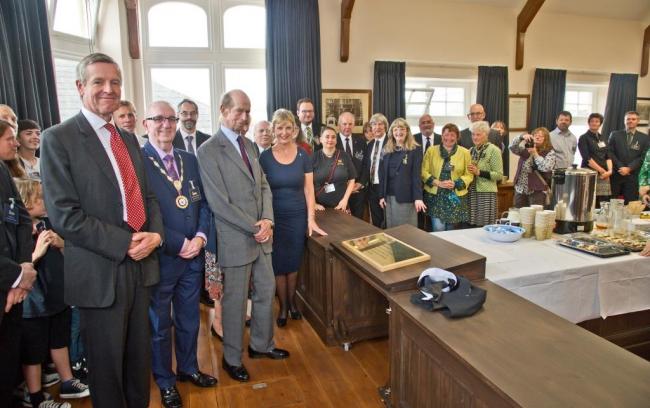 Camborne Town Council was proud to welcome His Royal Highness, the Duke of Kent to celebrate the opening of the new Council Offices and re-furbished library at the Passmore Edwards building on Tuesday. The Duke arrived in the newly landscaped rear Courtyard where he was greeted by the Mayor, David Wilkins, the Mayor’s Consort, Mrs Brenda Wilkins and Town Clerk, Amanda Mugford.

Students from St Meriadoc’s CE Infant School joined the celebrations by waving the Town Flag whilst members of Camborne Youth Band played an ensemble of Cornish music. The Duke met clients from Kehelland Horticultural Trust, which supplied plants and planters for the Courtyard, as well as representatives of Camborne RFC, Beacon CC and the Friends of Beacon Park who have all welcomed the Town Council’s acquisition of playing fields from Cornwall Council through devolution. Mr P Bickford-Smith, President of the John Harris Society presented ‘The Extinguished Candle Re-Lit, A Selection of Poetry and Prose by John Harris (1820-1884)' and ‘Git up and Go, A History of Cornish Mining Families’ by Arthur Langford. to his Royal Highness. The children’s reading activity session was a Big hit with all and Cornwall Council Officers expressed their pleasure in the new library facility that has resulted from devolution. Moving upstairs to the impressive new Council Chamber, HRH was presented to Councillors and local dignitaries, heard about the repairs and refurbishment of the building from 3HW Architecture & Design and RG Kellow Ltd, admired Camborne Science & International Academy student’s artwork displayed in the gallery space created by the Council and was interested to learn about the TR14ers, a local community dance group. The reception culminated in His Royal Highness unveiling a commemorative plaque before the climax of the afternoon when the 1932 photograph of his late father Prince George unveiling the Trevithick Statue was recreated with the Duke standing in his father’s footsteps. The Puffing Devil ended the visit with a memorable drive by and reminder of Camborne’s rich history.